The House on Bursaria Street

Nailbiters – Not for the Nervous.

Book launch of Carindale Writers’ Group Anthology, Nailbiters – Not for the Nervous 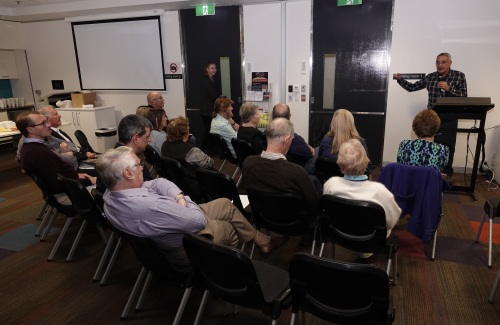 The Derelict by Hazel Barker

Sue picked her way up the rickety steps leading into the house. Years had passed since she’d seen her father, and she had no desire to meet him now. She remembered only too well, the reek of alcohol from his breath, the whimpering from her mother as his fists thudded into her. Her own face on fire with pain whenever he slapped her.

But her mother, always kind and forgiving, hearing of his illness, had asked her to find out what she could do for him.

He lay on the bed, his haggard, normally beady eyes half-closed, and his aquiline nose nearly touching the withered lips. ‘Come to gloat over me?’

Sue gazed at the decaying room in that dilapidated house. He couldn’t invite anybody here. His clothes were hanging on nails, and his crockery consisted of a cracked bowl and a tin cup. ‘Mum asked me to check whether you needed anything. Would you like a priest, a chaplain or anyone else?’

‘I’ll die as I lived,’ he replied. ‘I don’t need religion shoved down my throat.’

He hadn’t changed, and it was too late to try anything now, Sue thought. Even the woman he’d lived with after he’d divorced her mother had abandoned him.

How low could a man sink? He was well-educated, had an excellent job. Now he lay, a wreck of a man. That’s what alcohol had done to him—slowly and insidiously taken over his life. Not that he had ever been what she would call a good man.

He mother had always said, ‘Remember he’s your father. The 4th Commandment says to honour your father and your mother.’

She shook off the memories. ‘Would you like a drink of water?’

‘Haven’t you anything stronger?’

She scanned the room. A rusty old fridge stood within reach of his bed, the door half-open, showing its emptiness. It was probably out of order. She would contact the local Blue nurses and see what they can arrange.

There’s only water here,’ she said, picking up the tin cup and taking it to the sink to fill.

When she took the cup to him, the odour of vomit and urine made the bile rise in her throat.

Making no attempt to raise himself, he watched his daughter through half-closed eyes. Sue knew he expected her to raise his head and take the cup to his lips, but she felt reluctant to touch him.

Sue bent down, placing the cup near his lips. Still he made no attempt to raise his head.

She placed her arm beneath his soaked pillow, and raised his head. He drank with loud gulps, then grabbed her arm.

She stepped back with a flash of panic, remembering his wet, slimy kisses as she struggled to get away from him. He was still strong with the strength of a mad man.

When she managed to tear herself away from his grasp, he cackled toothlessly.

Why had her mother made her come? She knows how much I hate him too, she thought.

She backed away from him towards the door. ‘I’ll send someone to you,’ she said, barely able to get the words out, and ran.

Back home her mother was biting her lip and waiting on the front step. Sue ignored her, and hastened to the bathroom, lathering her arms with soap then soaking them in a solution of Dettol antiseptic. Goodness knows what she could’ve caught from him.

Her mother followed her to the bathroom. ‘What happened, Sue?’

‘What did you expect,’ Sue retorted. ‘Death-bed repentance?’

Josephine wrapped her arms around her daughter. ‘I’m sorry. I shouldn’t have sent you. His de facto had told me he was dying. I thought he was too weak to harm you. What did he do?’

‘He grabbed my arm.’ She swallowed hard. ‘He still scares me—I’m not going there again.’

‘You don’t have to, anymore. I’ll speak to Social Services. He should go into a home for the aged.’

‘He deserves no pity.’

‘No. I’ve forgiven him, but I’ll never see him again.’

The thought of her father haunted her. They had fled from him when he had beaten her mother mercilessly, and hoped to hide from him forever, but he had obviously traced them by some means.

Once, her mother had told her that she fell in love with him because he looked like Gary Cooper.  Well, she reflected, everyone did something foolish at some time or the other and lived to repent of it.

Her mother never seemed to lose hope. She kept praying all the time; praying to St Anthony when she lost her rosary, to St Christopher when she travelled, to St Joseph for a happy death. There was a saint for every occasion. Now she was probably praying to the patron saint of hopeless cases for her father’s conversion.

‘I give up,’ she said aloud, taking up her favourite book.

A few weeks’ later, they received a phone call. Her father was dying. He was at the Royal Perth Hospital in a semi-coma.

In silence, they took a taxi. Sue sighed with relief. It would soon be over.

The smell of disinfectant pervaded the room. The nurses left them alone with the dying man. Clean-shaven, the grey stubble no longer on his chin, he looked more like his old self—an observation which didn’t comfort Sue, since he had always terrified them.

His breathing was laboured and heavy. Mother and daughter sat beside him, Josephine mouthing prayers for him, and Sue silently watching.

He sat up, his eyes fixed on Josephine, his wife of thirty-five years. ‘I fought with the devil,’ he said, ‘and won.’

The light went out of his eyes, and he dropped back.

Josephine turned towards Sue. ‘He did reject Satan in the end, after all. My prayers for his conversion have been answered.’

Sue’s eyes opened wide. ‘Does that mean he repented of all the evil he’s done?’

Her mother’s face glowed. She nodded.

The Derelict was shortlisted in the Toowoomba Writers’ Festival Literary Prize for short stories, and published in their 2015 Anthology.